Why Diversity is not enough 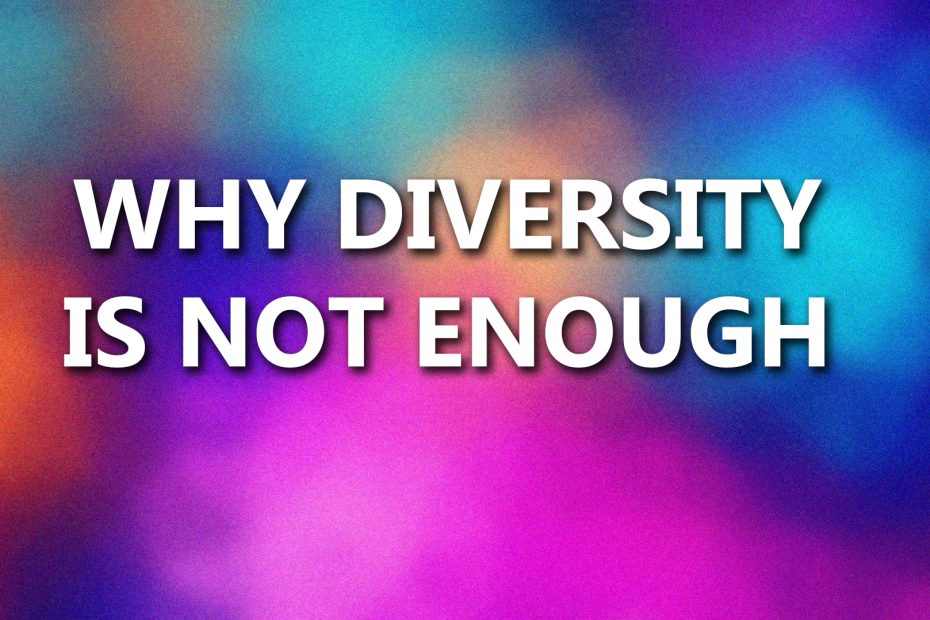 Nowadays, anyone who deals with art and culture cannot avoid the phenomenon of diversity. Rental companies, TV broadcasters and streamers are outdoing each other in their diversity attempts. Everyone seems to want to take part. The media world is becoming more colourful, they say. But what exactly does diversity mean? And how much effort and commitment is behind these attempts to advance society?

Diversity or diversity is a political idea. The term diversity comes from English and directly translated simply means “variety”. Diversity means the conscious handling of diversity in society, especially with regard to these seven dimensions of disadvantage:

The goals of diversity are to reduce discrimination, enable social participation and promote equal opportunities – across all these dimensions. In connection with diversity, one therefore also speaks of inclusion and equity. Historically, the idea evolved from the US civil rights movement and from the modern women’s rights movement.

We don’t see things as they are, we see them as we are.

In films and series, diversity is expressed in many different ways – that also corresponds exactly to its essence. Some narrative forms naturally lend themselves to this principle, while others require more imagination. In the following I would like to refer to a few successful examples, but also to less successful ones, in order to illustrate the challenges of this socio-political task.

A world epic tells an epic story that affects the whole world. In the case of diversity, the science fiction epic, the action epic and the fantasy epic in particular appear here. Characteristics are a broad lineup of characters by an ensemble that metaphorically represents the entire human family.

A pioneer in this field was and certainly is STAR TREK: In a distant future, mankind has settled its great differences. There are no more wars, no more poverty, and people explore space together with aliens. The franchise was progressive from the start, playing with thought-provoking ideas. Thanks to Star Trek, diversity is now part of everyday life in the science fiction epic and is a prerequisite.

When it comes to action epics, we mostly talk about teams of superheroes working together to save the world from evil. The Marvel superhero films started small until AVENGERS: INFINITY WAR saw the greatest superhero force in cinematic history come together to defeat the fanatical destroyer Thanos. Diversity in action epics is based on the increased mobility of the characters and the threat to the whole world, and here too it corresponds to the viewing habits of the audience.

In contrast to this is the fantasy epic. It is probably the genre that has had the hardest time depicting diversity. A great technique here is to create a unique trigger for a diverse group to come together. The prime example is the sudden power vacuum in GAME OF THRONES, drawing claims to the throne from all corners of the world of Westeros. In the end, the imagination is required to meaningfully occupy a new world with diverse characters.

Diversity in other Narratives

Not every story has to be a world epic. The idea of ​​diversity can also be conveyed in other ways. For example, when it comes to making intercultural conflicts or individual social groups visible. These approaches are particularly important because not every story should be told according to the same scheme, otherwise diversity will fall by the wayside (keyword: diversity paradox). So it’s clear that diversity means looking at the big picture.

As a further diversity approach, there is therefore the culture clash, which usually comes along as a “fish out of water” story. The main character ventures into an unknown world (BEVERLY HILLS COP, WELCOME TO THE SCH’TIS, CROCODILE DUNDEE). The culture shock can also be told as a buddy comedy in which two different worlds collide (LETHAL WEAPON, RUSH HOUR, INTOUCHABLES)

On the other hand, there are the classic milieu studies such as PRECIOUS, WOLKE9 or JOKER, which are dedicated to a specific subculture and are usually more dramatic in nature. Often, however, attempts are now being made to accommodate more additional diversity by arranging the figures more diversely, which brings us directly to the challenges of this movement.

Anyone who deals with diversity will encounter a number of challenges which, in my opinion, result from dealing with the idea of ​​diversity too schematically. I would like to focus on a few in particular:

From my point of view, the greatest challenge is trying to turn every story into a global epic. We see that with the example of the Avengers release BLACK WIDOW: The first female Marvel superhero (if you think about her appearance in IRON MAN 2) was a long time coming as a spin-off. Instead of an agent thriller in the sense of LA FEMME NIKITA, which would have justified Natasha Romanoff’s character development, we are presented with an action spectacle with a character ensemble like in the Avengers. Everything seems a tad too big for this character. This procedure leads to films according to a formula, since there is not enough space left for a variety of constellations.

With popular franchises, there is a great temptation to simply recast familiar characters in the interest of diversity. The difficult word here is “simply”. We remember the heated discussions about the future of James Bond. The audience finds it difficult to go along with a change if it is implemented carelessly. From my point of view, the courage to create new characters and to win over the audience is missing here. For example, why not include a cameo appearance by Idris Elba as 008 in JAMES BOND: SPECTER and then release a film series with him? A positive example here is definitely SPIDER-MAN: INTO THE SPIDER-VERSE about the new Spider-Man character Miles Morales.

A publicly disputed example of diversity are experimental attempts that challenge the viewing habits of the audience. In the historical series BRIDGERTON, the queen and a number of other noble characters were cast with black actors, while the series consistently ignores the issue of racism. There are different opinions about this. Some say this is historical revisionism. Personally, I don’t see it that way. I think this experiment is great because it opens up a discussion about viewers’ media skills. Films do not depict reality, they play with reality and we should also reflect on what we are watching. Let’s not forget: historical fiction is still fiction.

Comedy is a special case when it comes to diversity. Usually, the task is not to fuel stereotypes across all dimensions of diversity. Comedy, on the other hand, plays precisely with these stereotypes. Depending on which genre you combine the comedy with, a completely different form is created. That’s why it’s so hard to work with examples in comedy. Just this much: not every joke that is made has to please everyone, and yes, humor can hurt, but our society as a whole should be able to cope better with this danger that jokes polarize. On the one hand, the media competence of the audience is again in demand, but on the other hand, the same applies: better research leads to higher quality, even with comedies. Taking diversity seriously as a principle therefore always means investing more in the content.

At this point I would like to reiterate that diversity is a political idea and not an artistic one. That doesn’t mean that diversity can’t be expressed artistically, as the film and series examples clearly show. But it means that diversity on its own is purely symbolic, superficial politics. We need good stories and good stories need to be developed. The research effort and the dialogue with those affected does not take care of itself. Yes, that makes the products more expensive, but ultimately also better.

Diversity should be a constant process and not just looking at results. Writers do write the scripts, but since most scripts are commissioned, it should be clear to everyone that this is about corporate responsibility, not pushing responsibility down the food chain.

Whenever possible, we should avoid imposing ideas from the outside when it comes to cultural products. Films and series should be developed as organically as possible from within. I think setting incentives is the right thing to do. Instead of providing rigid guidelines, quota regulations and checklists, it would definitely be better to set up appropriate training and support programs for authors and provide them with the means for more detailed research. It should revolve around conscious diversity management and intellectual exchange. Finding new authors and stories should also be a matter of course.

Conclusion: The Future of Diversity

An individual has not started living until he can rise above the narrow confines of his individualistic concerns to the broader concerns of all humanity.

Those who leave it at symbols and diversity clichés show that they are not prepared to deal with the diversity and the diverse stories in our midst. Stories that we want to tell and share together.

As long as companies and authorities don’t do it, we have to take matters into our own hands. With the Ergocinema Screenplay Awards, I made a personal decision to work here myself. Anyone can participate in this prize and there is no limit to the diversity dimensions. With this project, I hope that there will be many imitators who will work for our common culture beyond their individual interests.