Trapped in the Realism Madness: A Critique 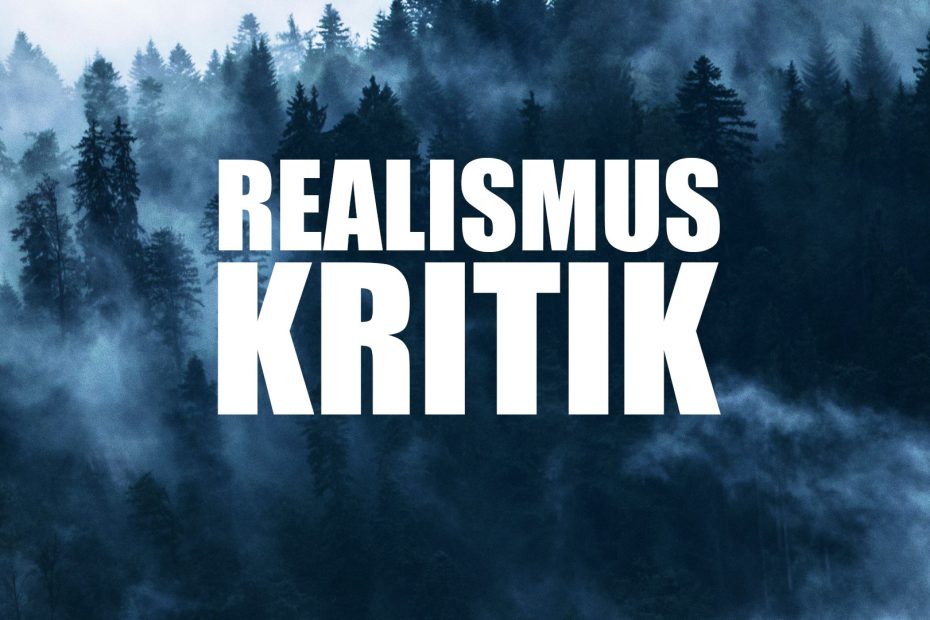 Nothing has film and television in such a stranglehold as the demand for a »realistic representation«. We find this claim across all formats. The demand for realism is in principle an intellectual one: one wants to distance oneself from the supposedly low, the unrealistic. It is very rarely defined what is actually meant by realistic and unrealistic. As with all great ideas that like to hide behind various »isms«, it is worth taking a closer look. This helps to reflect our own distorted ideas of reality.

Realistic is something that appears realistic. So it is about the appearance of a thing, not about its essence. Because every artist knows that art is always artificial and not natural. However, if you follow the common idea of ​​realism, then the artificial should be as close as possible to the natural. Even if we accept this requirement, there is a very wide range between realistic and unrealistic. A flying dragon blasting medieval cities with its fiery breath is certainly more unrealistic than a doctor performing the duties of a male nurse. Nevertheless, the latter is far from realistic.

What is considered realistic and what is not depends heavily on viewing habits and one’s own life experiences. Viewers who grew up watching Hollywood films are more likely to accept other things than if they only get their film knowledge from European art house cinema. Additionally, when viewers are nurses, they may find it easier to accept the fire-breathing dragon than the attending doctor. Now, if perception can be so individually different, where does this idea that the realistic is superior to the unrealistic come from?

Realism has always had a strong political dimension. Realism is about nothing less than being able to interpret what should be considered important in our society. When photography and cinematography emerged in the 19th century, things suddenly became possible in art that were previously unthinkable and there was a move away from mythology towards greatly reduced, everyday scenes. The realistic and its representation was elevated to a value in its own right. Essentially, two approaches to reality in art are in conflict with each other:

Deconstruction is about dissolving well-known art traditions and narrative styles. Progressive realism wants to get closer to reality through this dissolution and shake the viewer awake. Conservative realism, on the other hand, is about preserving tradition and not disturbing the viewer’s perception of reality.

Before the film brats, before the Scorseses and the Spielbergs and the De Palmas, directors in the late ’60s, early ’70s came from a kind of post-’60s anti-establishment mindset. And one gets the impression that they took “genre” as a dirty word. They wanted to see themselves as artists above genre, and when they did it was always a genre deconstruction. That’s not me.

We are all familiar with film clichés that have developed as conventions of the medium. It starts with the little things, like not saying goodbye on the phone — to save time and add drama to the edit. But larger things are also simply accepted, such as a teacher who can afford a huge apartment in New York right on Central Park. This makes for nicer images with greater depth. These conventions form a narrative tradition that is subconsciously rarely challenged.

Now let’s look at the metrics in detail. When a film or series is described as realistic, it is usually only about one of these three aspects:

Materiality is simple: when a period film like THE NORTHMAN is credited with being particularly realistic, what is meant is accurate sets, props and costumes. The other aspects, on the other hand, are rarely discussed.

When it comes to plausibility, you have to distinguish between truth and truthfulness. The moment when Neil Armstrong in FIRST MAN levitates his daughter’s bracelet into the moon’s crater to finally let her go is not documented, but still within the realm of possibility. The plausibility, the truthfulness, essentially seems to be preserved because the story to be told makes sense.

The biggest contentious issue is likely to be the mentality of a work. It is closely intertwined with the thematic strategy of the story. In MAN OF STEEL, they wanted to make the fantasy character Superman more “realistic” by imposing a trauma plot on him. Like a dark and bleak art house movie. After all, a pessimistic world view is often perceived as more realistic than an optimistic one.

But does that actually make the Superman movies more believable? Movies about an alien from another planet? One who flies through the air, knocks down whole blocks with his bare hands and can see through walls? Why should a story like this have to be realistic at all?

Zack Snyder’s approach reflects a very different mentality than Richard Donner, who brought Superman to life in 1978’s SUPERMAN: THE MOVIE. Donner was fully focused on plausibility. He brought the character’s optimism and charisma to the screen. The film’s slogan was: “You will believe that a man can fly”.

The metaphorical exaggeration is sometimes considered unrealistic, but it often makes a great film. We find it even in works that are considered particularly realistic. Take BOHEMIAN RHAPSODY, celebrated for his realistic reconstruction of the Live Aid concert. When, in Freddy Mercury’s eyes, the audience becomes the flames of passion in his music at the end — who would want to miss such moments in film history?

Film is life, with the dull bits cut out.

Traditional storytelling is clearly the focus for me. As writers, we need a full toolbox to draw from. That’s why I don’t reject the deconstruction, it definitely has its role. But it’s only part of the toolbox and in my perception it’s given way too much space. If it’s all about the form, then the content becomes secondary.

I think it’s tempting when the only tool you have is a hammer to treat everything as if it were a nail.

In mid-2021, Amazon Studios drew attention to itself with its new diversity guidelines. Her idea is to create an image of reality in front of and behind the camera. Actors, for example, should represent the minority groups they play whenever possible. As a result, it is completely forgotten what the profession of an actor is: to pretend. The artificiality of art should recede into the background and art should be subordinate to a claim to realism.

It’s no coincidence that large systems magically attract realism dogmas like these. Due to the simplicity of this worldview, many things finally become measurable and can be better controlled. Allegories, metaphors and symbols, on the other hand, are unpredictable and potentially dangerous. Socialist Realism in the Soviet Union or Romantic Realism in the Nazi era are extreme examples, but they stand out as a warning for all to see.

Art only attracts us by what it reveals to us about our most secret self.

Hopefully I was able to show with this article that there are many different realisms. A film or series can be very realistic in one thing but completely unrealistic in another. So when we talk about realism, we should define very precisely what we actually mean.

In addition, precisely because viewers are finding it increasingly difficult to distinguish between reality and fiction, we should also consider carefully whether realism as a concept should be given the status it currently has. Actually, we should know that atomic bombs are not the solution like in action films, that love doesn’t work like in Disney films and that scripted reality doesn’t reflect the reality of our neighbors’ lives. But do we really know?

In the end, I’m sure we can all agree that it should be about good films and good series, no matter what stylistic approach you choose. What is essential from my point of view, no matter what you write: the details. Only with enough detail can we bring our work to life. If details are still missing, we can always enrich our work with research. It doesn’t matter whether we want to write particularly realistically or not — that’s up to you.